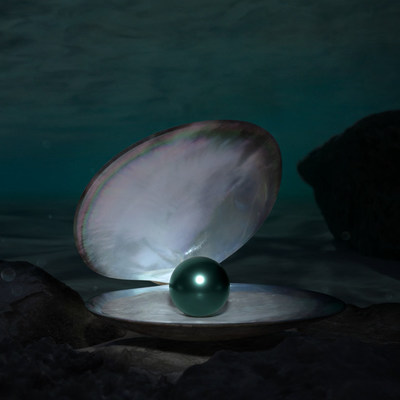 LOS ANGELES, Nov. 26, 2021 /PRNewswire/ -- Los Angeles-based shoemaker Tieks announced the inspiration behind its upcoming sixth limited-edition Black Friday ballet flat, launching Thursday at 9pm PT/12pm ET in an all-new Tahitian Pearl hue. Coveted treasures hidden beneath the waves of French Polynesia's lagoons, Tahitian pearls are known as some of the rarest pearls in the world and naturally come in a rare dark-colored green hue. The limited-edition ballet flat will feature dark green tones and comes with a pearl topper to match the theme of the shoe on top of the classic Tieks blue box.

The annual drop has grown in popularity since its inception – thousands of fans try to guess the color family and style all year long and eagerly anticipate the midnight release for the chance to purchase the coveted ballet flat, making this one of Tieks' biggest style launches of the year.

This special release was inaugurated when Tieks released Metallic Champagne by inviting fans to a Champagne party and made the shoe available exclusively to party invitees between Black Friday and Cyber Monday. Tieks CEO Kfir Gavrieli, with the encouragement of customers and fans, decided to make the four-day shoe an annual tradition. Gavrieli wanted the Tieks community to have something one of a kind that is unique to the brand and its offerings.

Tahitian Pearl's mesmerizing color and pearl topper are representative of the rarity and value of the Tahitian pearl—making this limited release the treasure of the season. Nature's Tahitian pearls come from the back-lip pearl oyster and are one of the most valuable pearls in the world. Unlike many other dark colored pearls, Tahitian pearls come by their dark color naturally and feature various iridescent tones that add depth and uniqueness to each pearl.

"We are proud to launch our sixth annual Black Friday release," Gavrieli said. "This is an event that our team and Tieks loyalists look forward to all year. Our goal is always to create a special shoe for our community, and we hope they love it as much as we do."

Over the past two years, Tieks has launched a successful SewTogether campaign to sew and deliver over 1,000,000 masks to hospitals, as well as the Tieks for Heroes campaign to reward frontline medical personnel and as other essential workers. In the same vein, Tieks for Teachers, honored those who serve our nation's education system for the challenges they faced during the pandemic.

Uncover the treasure of Tahitian Pearl while supplies last now at Tieks.

About Tieks:
Stylish, comfortable, durable, and foldable, Tieks are the most versatile flats in the world. Tieks is committed to women's empowerment and, through the Gavrieli Foundation, has become the largest individual lender in the world on Kiva, sending over $10,000,000 to women entrepreneurs living in poverty around the world.